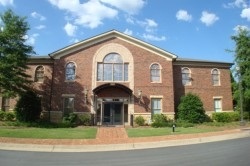 However, DeWitt wanted to pursue his passion and follow in his father’s footsteps; dad being a Hall-of-Fame professional golfer and multiple tour winner. DeWitt’s victory in the 1988 Georgia State Open confirmed his decision and he began the quest to obtain his PGA Tour Card that year.

While competing on various tours, DeWitt found that many of his peers had no idea how to manage their money. One memorable evening, DeWitt was headed to dinner with a fellow player who had won several large checks over the previous weeks. DeWitt asked the player what he was doing with all his new found money. The player opened the console of his car and showed him a dozen or so un-cashed checks. “There you go”, he said. DeWitt simply could not believe it. It was at that moment DeWitt realized he could truly help his peers.

DeWitt developed an envelope system to keep up with his expenses; in addition, he opened accounts at Charles Schwab to invest his personal prize money. He simply started telling other golfers what he was doing. Word quickly spread that if you bought DeWitt dinner, he could help you organize your finances. DeWitt enjoyed helping his peers, and little did he know this was planting the seeds of his next career.

After noticing the number of accounts managed by DeWitt, the director of Charles Schwab’s Institutional Service Group gave DeWitt a call. “Have you thought about moving your accounts over to the Schwab Institutional side of our business and managing these assets more efficiently?” In the early 90’s there was little known about the Independent Registered Investment Advisor (RIA) business model. DeWitt thought that in order to be in the investment business, he would have to work for a broker and charge commissions, a model that did not interest him at all. This call sparked his interest and he met with Schwab later that year to learn about becoming an RIA.

In 1993, DeWitt founded Linksman Financial, a firm dedicated to managing the finances of professional golfers. He continued to pursue the PGA Tour for three more years, but found a deeper satisfaction in helping others with their money. In 1995, he fully committed to the Investment Advisory business. To further improve his client offering he became a Certified Financial Planner in 1996. Soon his clients included small business owners, high net worth families, entertainers, and other professional athletes. The firm moved from Orlando to Atlanta in 1999, a move that brought DeWitt closer to his family.

Through the growth of the firm and the ultimate re-naming to Weaver Capital Management, DeWitt has found that helping people manage their money and make sound financial decisions is interwoven with a biblical world view. Sound advice needs to have a solid foundation and not be based solely on the accumulation of wealth. A man of strong faith, DeWitt sought to educate himself on what the Bible says about money. With the help of organizations like Kingdom Advisors and his work as a Deacon at his church, DeWitt has integrated biblical principles into the firm’s practices. He feels it is very important that clients receive advice from a firm that shares their world view.

Weaver Capital’s heritage was built on a solid foundation. DeWitt realized that building a team would enable the principles he practiced to further the firm’s vision. By investing in the development of a leadership team, the firm’s core values and principles could become transcendent. This would also enhance the level of service provided to clients and further galvanize long-term relationships.

In 2003 Carol Oliver was hired and has played a key role in the firm’s success. Toddi Blythe joined the firm in January 2018 and in January of 2022 James White joined as a Wealth Advisor.  The firm also utilizes a dedicated ten plus member support team at Charles Schwab. Weaver Capital Management remains committed to helping clients make wise financial decisions and enabling them to prosper beyond worldly riches.